The 4B Braime Group, headquartered in Leeds / UK and known across the bulk material handling industry for its range of bucket elevator and conveyor components, has just celebrated its 130th anniversary. In recognition of its continuous pursuit of “engineering excellence since 1888”, the company has been awarded the prestigious Yorkshire Society plaque.

The Braime Group traces back its origins to the 19th century, when oilcans, made in a small workshop by Thomas Braime, quickly gained a reputation for quality. Thomas, the eldest son of a veterinary surgeon, was apprenticed to a steam traction engine manufacturer. After losing his thumb in an accident, Thomas was inspired to look for effective ways to apply oil to machinery without spillage. His new oilcan design, with its detachable spout and handle, provided the user with perfect control.  Thomas set up production in 1888 in Leeds. He was joined by his younger brother, Harry, who was also an apprenticed engineer. The two of them had no money, but it was their ingenuity as engineers and their ambition to be “Better by Design” – still the company’s marketing slogan today – which drove the success of their business. The Braime oilcan was soon exported worldwide to the expanding railway industry and became the method of oiling locomotive wheels.

Around 1900, the brothers pioneered the introduction of a new technology of Deep Drawn Steel Presswork, manufacturing parts for the consumer, military and automotive industries. The company also began manufacturing pressed seamless steel elevator buckets, issuing its first catalogue in 1908 offering over 350 sizes.

The Braime buildings, a prominent fixture on Hunslet Road, Leeds, with its attractive red brick and terracotta frontage remains to this day, the headquarters of the group.  Nowadays it is often used as period location in film sets and television, including the popular BBC2 drama, Peaky Blinders.

During WW1, the company played an important role in armament provision, training women as skilled munitions workers. Post-war, the business continued to grow, supplying to car manufacturers Austin and Morris.  In 1950, it obtained a full quote on the London Stock Exchange and expanded into a range of engineering components including brake chambers, material handling and other specialist products for the medical, petrochemical and utilities industries.

The 4B division – Components “Better by Design”

In the latter part of the 20th century, the group launched its 4B division, which specializes in the provision of components for material handling industries.  After setting up in the UK in the 1970’s, it then launched its electronics range in the US in 1984. 4B has expanded steadily ever since, acquiring its French subsidiary in 1991, opening its Asia Pacific presence in Thailand in 2003, 4B Deutschland in 2005, South Africa in 2008, Australia in 2010 and Brazil in 2017.  2018 saw the launch of its most recent subsidiary in Changzhou, China. Today the 4B Braime Group operates in over 80 countries and the 4B brand stands for world-wide reliability and quality engineering.

With the world’s largest range of elevator and conveyor components, 4B’s material handling division has led the field in elevator bucket design and manufacture by supplying the highest quality products. Amongst the company’s most well-known product innovations are the Starco elevator bucket (the world’s first low profile elevator bucket using centrifugal discharge on a parabolic elevator head which revolutionized the way bucket elevators work until today) and the Bolt ‘n’ Go chain system (a revolutionary assembly method for drop forged chains using bolt-on flights instead of welding).

Innovation has always been at the heart of the group’s ethos, and in the 1980’s with growing safety concerns and a need to monitor the performance of bucket elevators and conveyors, the company was the first to launch a range of specialized electronic components and sensors to reduce the risk of explosions in hazardous environments. When 4B introduced their Watchdog Elite bucket elevator monitoring system, they were the first on the market to offer a system that could monitor a complete bucket elevator or conveyor system. No more need to monitor different hazards separately. -Taking the hassle out of hazard monitoring, the Watchdog Elite has quickly established itself as the industry reference in hazard monitoring. 4B sensors and monitoring systems are trusted worldwide to detect and prevent explosions in material handling installations in animal feed factories, oil processing facilities and port terminals.  Designed and made in Leeds, these products have become an industry leading brand. The 4B group continues to develop new products in line with changing technology and its electronic systems such Hazardmon, are designed to be operated remotely via the cloud.

“4B Braime is a customer focused engineering business, which from its foundation, has always aimed to provide customers with products and solutions which are “better by design”, Nicholas Braime, chairman and group managing director, explains.

The group is indeed proud to celebrate 130 years of excellence and looks forward to a bright future. 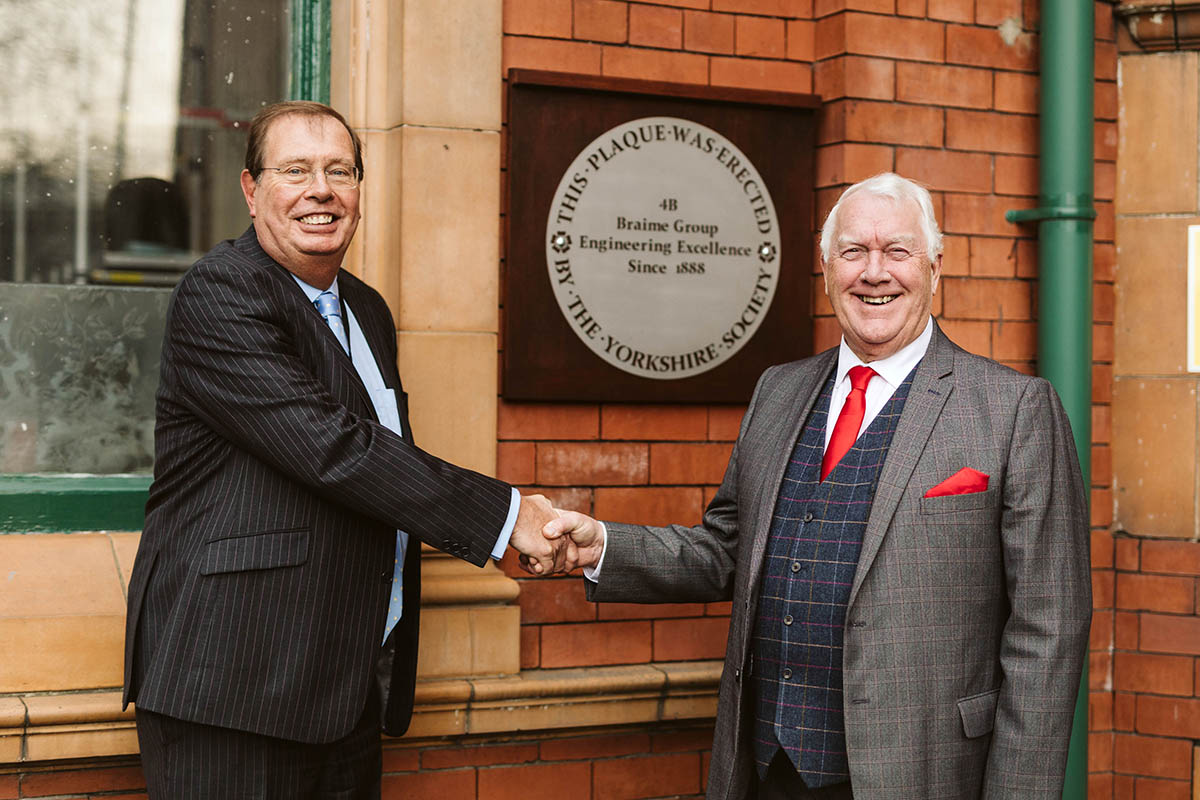 Please upload a pdf or enter a link for the press release title. If you enter both the pdf will be used and the link ignored.

Please upload a pdf or enter a link for the product image. If you enter both the pdf will be used and the link ignored.

Slider Images will be shown on the page with other images linking to related or selected pages.